Would I recommend Chilli Jam Vans to anyone?

I wouldn’t know where to even start to do them justice to be honest.  What I will say is, if you’re looking to do something truly special in terms of a conversion, that is not only unique but completely personal to you, then this is ’the’ only UK outfit you should consider.  If they’re busy….wait! 🙂

Furthermore and to my point above on the importance of the person actually undertaking the conversion for you….then if you’re looking for someone who has massive integrity, is honest, friendly, a master craftsman at his trade and with an attention to detail and finish that I think is genuinely very hard to find (I’ve seen the bad and the ugly whilst researching), then you should not look any further than Brett at Chilli Jam Vans.  The guy’s an absolutely legend and I am privileged to now call him and his lovely wife our friends 🙂 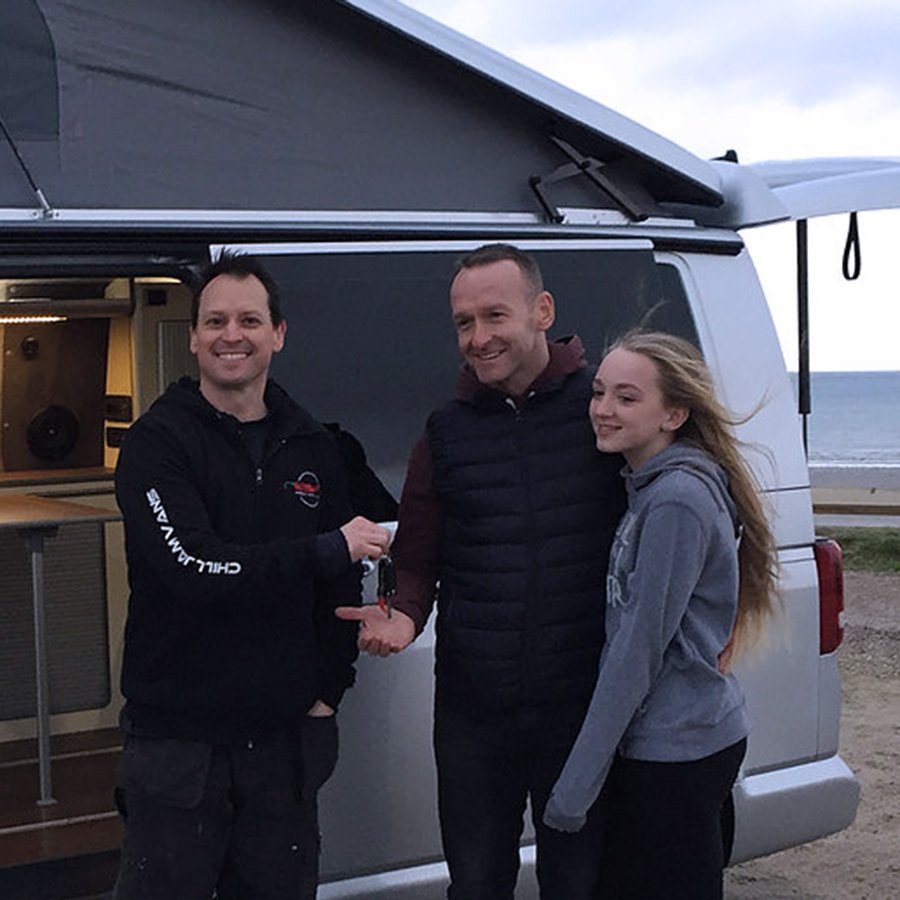 Since I was small and my mum and dad had an bashed up VW Combivan in Nigeria, I’ve always wanted to own a camper of my own.

Passing my 40 year mark and realising that family holidays together were slowly growing to a close (my eldest son was 15  and would soon be looking to sample the joys of Magaluf and the likes), we decided to hand back our latest lease car and take the plunge into the world of camper vans.

We will use it for adventures starting this weekend. We will do short trips in the UK but we also want to head over to Scandinavia and even Lapland.

Easy enough we thought…then we started to look into the actual task that was facing us.  After a couple of days, we began to realise than this wasn’t going to be as simple as we thought.  I started to ring round various converters, then researching VW vans for the first time.  Immediately, tied up in knots around T30 or T32 vans, barn doors or tailgates…never mind Webasto heaters and bed systems…I realised just how important my converter was going to be to me.

I’m a purchasing manager by trade, so researching the market and ensuring value for money is what I do for a living.  What struck me after I’d rung at least 15 UK converters was just how rigid most were in what you could spec, never mind the fact that you seemed to have to just ‘fork out’ a massive sum of money and take it for grated that all the equipment, components and accessories would be ‘fine’.

To exasperate the problem, I also visited a big local converter, just to be told I could only have one of three specs, no variation inside or out.  Whilst visiting them, I found supposedly custom/hand made kitchen units with gaps big enough to pass three stacked pound coins through…I was losing confidence and starting to wonder if this was a good idea.  After all this was singularly the second biggest purchase of our lives after our house.

Then – I spoke to Chilli Jam Vans…

I was reaching the end of my list (and the end of my tether).  Two more calls and I’d decided to then I’d call it a day.  I picked up the phone to Chilli Jam Vans on a Tuesday afternoon and Brett answered.  As soon as he started talking I got a good ‘feeling’.  He calmly answered all my questions (of which there were lots and I’m sure in no logical order).  As he spoke to me two elements never left me to this day…
Firstly, he kept saying things like -“Even if you don’t want to go with Chilli Jam Vans, make sure that they ‘do this’ or ‘do that’ and “keep an eye ‘on this’ and ensure they don’t ‘do that’”.  The chap was basically just spending an hour of his own time getting me up to speed on the key things I needed to ensure I thought about…no sales, no pitch, just genuinely friendly, simple to understand and free advice.  You can see why I immediately started to feel better about the whole project!

Secondly, when I asked Brett how big Chilli Jam Vans was, he started to explain that it was primarily him, with a few trusted people to undertake specific elements.

….that was it, I was sold – this was the guy and the company who were going to help us my fulfil our dream.

“Goldsithney, Cornwall” I replied.  “…but we live in Edinburgh??”

So, some may think we were mad to decide to go with a converter at the very opposite end of the country, but 4 solid weeks of research every day had quickly taught me that knowledge, skill, approach and above all honesty/attitude were going to be the difference between us getting the exact van we wanted at the best price possible….or, ending up with a van loads of people would have (save perhaps some colour scheme changes) and breaking the bank in the process.

If you’re truly wanting custom, the person leading the conversion choice really is ‘the’ difference to the whole experience and the most important choice you’ll ever make.

People have asked “How hard was it working on the project across such a big distance?”

Honestly, it has been one of the best experiences of my life.

Right at the start, we spec’ed out the basic van / conversion and then slowly built out the spec, building in the costs slowly and methodically, so there were no surprises through the process.

Brett put me in contact with VW dealers he knew, as well as advising me on the full wish list I should be looking for (once I’d decided to go for a year old vehicle).  God only knows what I would have ended up with had he not provided so much help and guidance.  The result was a beautiful one year old VW Transporter T5 T30 LWB DSG in Reflex Silver and with everything I wanted save a couple of small pieces.
So van sorted, now the real work began!

From day one, Brett told me to outline everything I wanted and then he’d work to get as much of it in the spec and built.  He always asked what I ideally wanted, then provided advice and alternatives where things were technically not doable, too expensive…or sometimes would just look rubbish 🙂
We kept a running spec and costs list going between us…I can’t even remember what the last version of the spec and costs list was at the end.  But, this was probably one of the most important aspects, as at the end we came in on budget (only a couple of bits that went over the original, but that was because we asked for them and Brett always gave us the costs up front to weigh up in the round).
We spoke every week about the build, parts that were arriving and he always sent pictures up to me showing the various stages of insulation, sound deadening, electrics, flooring, fitting the seats…you name it and he ensured we saw the progress.  This was brilliant for a couple of reasons.
Firstly, it was just fascinating seeing how much work goes into the van and that you simply don’t appreciate when you finally see the finished product.  I honestly learned so much about the conversion.

Secondly, there is no stage that you’re worrying about corners being cut, things being missed out (and believe me, I’ve spoken to a lot of people who’ve been ripped of like that)…this is always the first question I was asked by friends and family – “How do you know that he’s not simply putting low quality parts on the van or nothing at all?”  “Easy”, I’d say, “I was practically in the workshop ever day!”

Only the last two weeks saw the updates slow to a stop…..”I want you to be wow’d when you see it Pete” Brett said.

Well, he wasn’t wrong!  I flew down to Hayle with my 13 year old, Amelia.  Already the van was having the desired effect of bringing us together as a family…after all, how many dads get the chance to spend a solid two days one to one with their daughter to really catch up and chew the cud.  Brett’s wife, the amazing Kat drove all the way up to Newquay to collect us from the plane and took us back to the Chilli Factory (cool name, hey!)

As we stood in the biting Cornish breeze, the door slid up and there stood Brett next to….

Well, I’ll let you be the judge from the pictures, but just to say that I’d never personally seen a more beautiful camper and it literally was everything I’d dreamed of and more.
After some professional photos with a local photographer and a two-hour session to explain the van’s moving parts, controls, maintenance and general up keep, we said our good-byes and headed back up the road to Edinburgh for the first of many exciting road trips.

Would I recommend Chilli Jam Vans to anyone?

I wouldn’t know where to even start to do them justice to be honest.  What I will say is, if you’re looking to do something truly special in terms of a conversion, that is not only unique but completely personal to you, then this is ’the’ only UK outfit you should consider.  If they’re busy….wait! 🙂
Furthermore and to my point above on the importance of the person actually undertaking the conversion for you….then if you’re looking for someone who has massive integrity, is honest, friendly, a master craftsman at his trade and with an attention to detail and finish that I think is genuinely very hard to find (I’ve seen the bad and the ugly whilst researching), then you should not look any further than Brett at Chilli Jam Vans.  The guy’s an absolutely legend and I am privileged to now call him and his lovely wife our friends 🙂